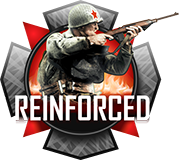 To be on top of your competition in WW2 you need the best gear on the market and our Mega Modz controllers may raise your game in a matter of hours. Various performance modification perks available for the line of PS4 controllers, will make you able to easily compete with the most experienced players.

Rapid Fire has been the basic and main function of any modified gaming controller for about a decade. The feature is widely recognized among gamers due to its compatibility with semi-auto and single-shot weapons that are very well presented in WW2 and the simplicity of use.

WW2 is as close as possible to reality which makes our Call Of Duty compatible gameplay features especially useful for 2017 COD entry. Drop Shot is one of the most popular technics highly utilized by COD fans as it makes your soldier a really tough target for opponents.

Quick Scoping is a highly popular method of combat in the game as there are tons of locations and setups perfect for taking your enemies out with a sniper rifle. Our special function highly effective on sniper rifles will help you own the game from the start.

Every second spent on wandering around aimlessly or reloading your weapons may cost you a game. Adjustable Fast Reload option will reduce this chance to zero allowing you to reload your ammo in a matter of a second.

The list of WW2 compatible options doesn’t end here. We encourage you to explore all available functions to find the ones that will be a great addition to your gaming style.

Mimic Back Buttons To Optimize Your Hand Use

With the back buttons remapping ability, you can customize the functionality of your PS4 gaming controller precisely to your needs as any stock controller button can be mapped to the back one. It gets even better as you are able to change the assignment at any time during the game.

With COD WW2 having been made as to the video game simulator of the Second World War events, weaponry, reaction time, and characters’ abilities are close to real-life ones. It’s delightful to have an FPS experience with the maps full of close-quarter buildings, back streets and hidden corners perfect for a cover. The functionality of our custom Xbox 1 controllers will help you to enjoy the gameplay to the fullest where you get to choose whether to activate special abilities for your character to gain an extra competitive edge on the battlefield or play it with no enhancements.

WW2 offers a great selection of real-life weapons that are the best fit for the function of our advanced Rapid Fire mod. You can turn any somewhat effective weapon into a lethal tool and jump into the attack with a click on one button on your controller.

Our controllers for Xbox One deliver a broad range of functions engineered to reveal the maximum potential of your soldier performance. More firing abilities, customized reload time, precise targeting, non-stop running and many other options easily accomplish the goal of making you one of the top players in your team.

When every second count, you can minimize the time needed to perform an action in the game using an advanced button remapping functionality brought via Mega Modz Remappable Back Buttons. Mapping any controller stock button can be completed within seconds on the fly.

Call of Duty franchise set a goal to regain a leading position in the world of first-person shooting games with its 2017 entry - COD WW2. It’s no secret that even the most dedicated fans of the series got tired of futuristic format the last few CODs were performed in. To everyone’s relief, the WW2 has returned to a more traditional shooter concept where players get to defeat the enemies based on their combat skills, aiming precision and proficiency at strategy making. Taking off to the air, jumping on the walls, using over-the-top weapons to gain a competitive edge is no longer in the picture. The FPS is a great example of a classic COD that takes us back to the times of the Second World War, Europe based map locations, and a fresh perspective on the biggest warfare of the 20th century.

On August 25, 2017, Activision gave access to a Beta version of the game to everyone who had pre-ordered it via an automatic entry or a special code depending on the purchasing method. PlayStation 4 was the first system available for the experience with Xbox One to follow. Participation in WWII Beta also guaranteed a unique combat pack for all players. Available features included three enhanced multiplayer maps; exciting War mode the developer added to tell a story; modes most favored by the fans such as Domination, Deathmatch, and Hardpoint; 5 extremely entertaining Division modes and Progression where players rank up as the game progresses.

Many additional options were not available in Beta and included customization experience in Loot and Supply Drops, a set of Esport challenges, a brand new social feature via Headquarters, a variety of additional maps, a full list of the armory, equipment, and basic training options.

The game was released on November 3rd in 2017 exclusively for Microsoft Windows, PlayStation 4, and Xbox One users.

The campaign mode of COD 2017 entry starts with the first mission taking place in Normandy and then moves players throughout Europe (France and Germany settings) of the mid of the last century. An interesting fact is that the mode has a lot of Swastika symbols featured to honor the history and emphasize the ideology lying behind Nazi military actions. All other modes don’t seem to mention the symbol at all due to ethical reasons most likely.

A newly featured War mode resembles the first COD games campaigns a lot but has much more to offer to the table. It’s a beautiful mix of BF Operations, Payload of Overwatch, and traditional COD Zombies where players get to complete a series of missions in order to finish the main challenge. Great teamwork and true focus are required to master the WWII War mode.

No doubt, the multiplayer is a key mode for any FPS. WWII multiplayer offers a number of well-thought maps based on the Second World War most prominent combat locations in Russia, Germany, Italy, and France.

The multiplayer comes with 5 Division class systems allowing players to select a specific set of skills to have a personalized experience on the battlefield based on their goals and combat style. For example, the Infantry Division is a basic class concentrating on the essential skills from using rifles on the distance to stabbing nearby enemies with a bayonet. The Armored Division focuses on rocket launchers and light machine gun skills. The Mountain Division wraps up sniping and all related weaponry etc.

A great choice of WW2 weaponry is available for the players, from pistols and shotguns to bayonets and dynamite all delivering a close to real-life experience in terms of the weapons speed and functionality. Battles are quite dynamic and offer battles in every possible surrounding - air, ground, and water.

Historically Zombies have been one of the most popular modes of any COD game. WW2 Zombies pleased the fans with new Nazi Zombie characters and intense battles taking place in Germany village where players are on a mission to find stolen art pieces. The mode delivers a deeply engaging horror action that will keep you thrilled and alert from the very beginning.