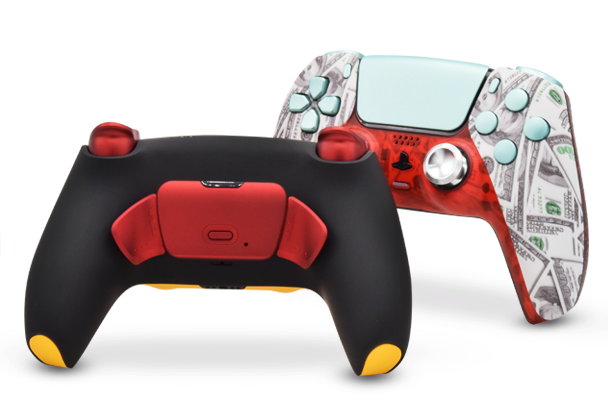 The Mega Modz Advanced Back Buttons for the PS5 controller can be tailored to any playstyle. They add versatility and performance while maintaining the comfort and feel of the DUALSENSE 5 wireless controller at the same time.

*NOTE: The user can configure the Turbo Mod timing sequences.
The times that the stock buttons are pressed and released are programmable in steps of seconds, hundreds of milliseconds, and tens of milliseconds.

Differ in the advancement level of the Back Buttons selected:

3. Option 1 ( Two Rear Buttons with Standard Remap) + MODS. A modded controller that is complemented with remappable buttons for Online/Offline gaming. Not allowed in tournaments.

Each Controller Setup can be configured in the PS5 Controller Creator.

NOTE: If your controller Back Buttons configuration is Macro Remap, then, click here to get to the correct instructions

There are 3 main components besides the stock controller buttons involved in the process of configuring rear buttons.

It is a built-in LED board with advanced LEDs. It looks like a square consisting of 4 LEDs located next to each other. All four LEDs are mounted directly into the controller shell. If you’re holding the controller shoulder buttons up then, Slot 1 - upper left; Slot 2 - upper right; Slot 3 - bottom left; Slot 4 - bottom right.

The LED Indicator lets the user interact with the modchip and be aware of what functions are active at any time. It also helps to scroll between sub-modes (If available), set up custom values (timing) for Turbo Mod, and get notifications about active configurations in real-time. Each stock button is color-coded when it gets assigned to the back buttons. At any given moment the user is able to detect which button is assigned, and what configuration and setup it represents.

It is an additional built-in button located at the bottom center of the attachment. The main and only purpose of it is to simplify the configuration process. There is no need to press it for any other purposes during the gameplay.

These two large ergonomic buttons are located on the back of the controller in the area of middle finger placement. The location of these buttons is very convenient because the user does not have to reach for them. To avoid any accidental clicks, middle fingers can be moved up towards the center.

The Advanced Buttons are the main tool in the game. Once set up, they will perform a sequence of programmed instructions.

Color-coded LED lights help the user to better understand what’s going on with the modchip and rear buttons. For instance, when a stock button gets assigned to a back button, the LED indicator will represent a button in the color according to the table below:

In order to assign controller buttons to the back paddles please follow the following steps:

NOTE: The second sub-mode (Turbo function) is not available if only Straight Remap was selected in your Back Buttons configuration build.

The LED indicator will flash all 4 slots in GREEN showing that the modchip entered the sub-mode menu. It will then show the sub-mode that is active currently.

NOTE 1: Sub-modes function is not available if only Straight Remap was selected in your Back Buttons configuration build.

NOTE 2: Keep in mind, there is a "3-second rule" that applies every time you change sub-modes. If you've been inactive for more than 3 seconds, the modchip will exit the sub-mode menu without saving the settings.

Turning Back Buttons On & Off

Once a Back Button gets paired with a stock button, it automatically becomes active (See "Pairing Stock Buttons" section).

However, there is an option to turn a Back Button OFF.

The Slot 1 or Slot 2 LED corresponding to the left or right back button will change its position to Slot 3 or Slot 4 respectively, indicating that the feature has been disabled.

You can enable the Back Button again by repeating the same steps as turning it OFF. (Hold Mod Button and Tap Back Button)

NOTE: The controller always remembers the last Back Button setup before disabling it. Activating or pairing a Back Button with the same stock controller button will always return to the saved configuration the user has used previously (unless the reset to factory defaults was performed).

Setting Up On & Off Function for Mods

If your controller configuration has MODS (Rapid Fire, Drop Shot, etc) and you have selected Advanced Back Buttons functionality in your configuration build, then, you can also configure Back Buttons as ON/OFF switches to disable/enable mods on the fly.

In order to configure the Quick ON/OFF switch for Shooting Mods follow these steps below:

In order to configure the Quick ON/OFF switch for Special Mods follow these steps below:

In case, you have configured both back buttons as ON/OFF switches for either Shotting or Special Mods solely, then, the Left Paddle is always OFF function and the Right paddle is always ON function.

IMPORTANT: This section provides advanced settings and requires a full understanding of all the operations described above before proceeding.

The Turbo function (2ND Sub-mode) comes pre-configured with factory settings by default. However, since every game is different, the user is able to program the timing a button is being pressed (ON button timing) and the time between button presses (OFF button timing) via a programming mode.

Button timing is programmed by individually setting up seconds then hundreds of milliseconds, then tens of milliseconds. The minimum unit of time that can be changed is 50 ms. The software won’t allow the user to go above and below the pre-programmed limits.

When programming mode is entered (Mod Button + PS Home Button), the timing may be adjusted in the following order: seconds, then hundreds of ms, then tens of ms.

All four LEDs will light up in WHITE to let you know that it’s waiting for further input.

The modchip displays the "hundreds of milliseconds" digit.

The modchip displays the "tens of milliseconds" digit.

NOTE 2: There is an "8-second rule" that applies to "Programming Mode". If there is inactivity for more than 8 seconds, the modchip will exit the programming menu automatically.

The modchip allows the user to reset all configurations (sub-modes and timing) to the factory default settings and clear the Back Button Inputs.

Here are the steps: